Home Articles Representative Government: Diversity in the next Parliament

Representative Government: Diversity in the next Parliament 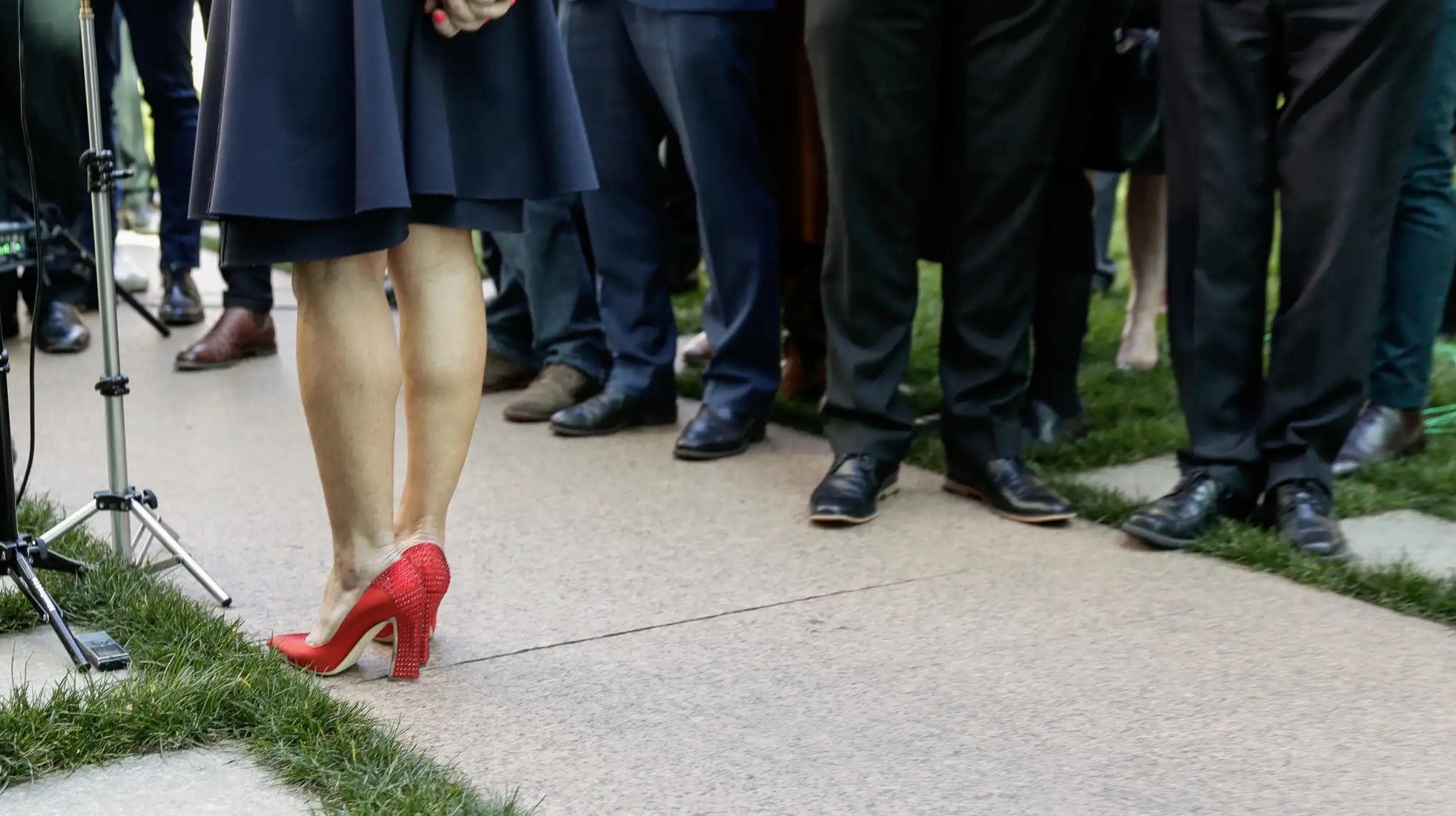 Australians will soon go to the polls on 18 May but latest data* from the McKell Institute shows voters are limited for choice.

Where are all the women?

This election, at least ten female politicians will leave the House of Representatives and there’s not enough women set to replace them.

Women will comprise only 37% of candidates running for the Lower House from the major parties this election. The Labor party instituted affirmative action policies in the 1990s that have seen the number of female candidates steadily rise each election. The move towards gender parity in the Coalition is in the right direction, but at a slower pace with women making up only 30% of candidates, or even less if you look at truly winnable Coalition seats.

At current rates, it will take 8 election cycles to reach gender parity, with a culture that some in Parliament like Julia Banks, a former lawyer and company director, describe as “years behind” the private sector. 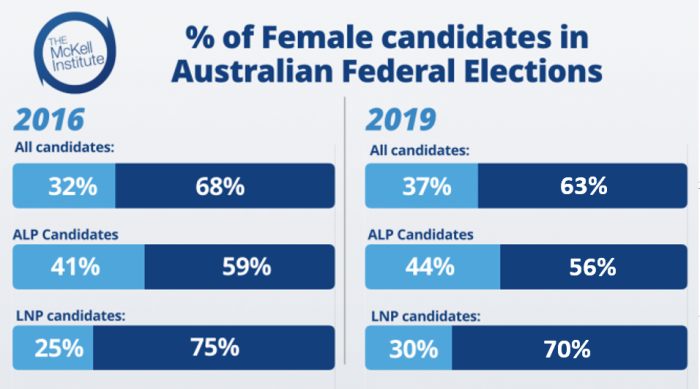 Compounding the issue is the fact that it’s the Coalition trail blazers that are leaving the building. Those like Julie Bishop, the first woman to contest the leadership ballot of the Liberal Party in its 75-year history and Australia’s first female foreign minister and Kelly O’Dwyer, the Minister for Women and first female cabinet Minister to give birth whilst in office. Minister O’Dywer has not only advocated for change in representation but has also established an Enid Lyons Fighting Fund to financially support female Liberals running for election.

One of the many reasons why female representation in Parliament is important is because it is our Federal politicians who hold the levers that can help close the gender pay gap which sees women earn $25,716 per year less than their male counterparts and close the gender super gap which leads women to retire with 42 percent less.

Minister O’Dwyer promised to increase funding for key institutions like the Federal Government Workplace Gender Equality Agency which has achieved huge gains in closing the pay gap and changing the culture in Australian workplaces since it started operation nearly six years ago.

Whilst the lack of gender parity has been a hot political issue, little attention has been paid to other areas where our Parliament is completely unrepresentative of Australian society.

A Parliament that was built for able-bodied parliamentarians…

When Greens Senator Jordon Steele-John arrived in Parliament, he sat alone in the back of the chamber because, in a wheelchair, he couldn’t reach the seats where his colleagues sat. He scraped his knuckles as he went through the narrow Parliament House doors and he couldn’t access the toilet in his office.

He was prevented from doing a job that he was elected to do – vote. He missed votes because you are allowed 4 minutes from when “the bell rings” to get to the floor of the Senate to vote. Parliament House contains 4,500 rooms, meaning Parliamentarians are often seen sprinting from one side of Parliament to another when a vote comes on unexpectedly.

These barriers haven’t stopped his tireless advocacy.  His presence in the Parliament has brought disability issues to the forefront of political discussion in Australia and he has used his voice to push the Government to announce a Royal Commission into the abuse of people living with a disability in Australia.

And yet he acknowledges the message his experience sends to others about inclusion and power:

“If someone is physically excluded from a space and that is visually seen to be the case then that sends a strong message about the role of that person within that institution.”

Currently, Senator Steele-John is the only person of 250 parliamentarians who uses a wheelchair and not much is set to change.

In this election, only 1% of candidates from the major parties have a disability.

That’s not to say there are no incredible candidates with disabilities, running for election. Those like Ali France, a young mum, gold-medal Paralympian and fearless disability advocate who is the candidate for the seat of Dickson. Sam Crosby is campaigning for the seat of Reid and has publicly discussed his childhood diagnosis of dyslexia and how his teachers helped him succeed academically after he was diagnosed. Sam has used his experience to passionately advocate for better funding for education and universal access to early childhood education.

But just 1% of candidates is not enough to represent the voice of people with disabilities who make up 18% of the population.

One in three Australian households have a person living with disability and nearly half of Australians with a disability are living either near or below the poverty line, more than double the OECD average. Surely these numbers require a greater voice in our nation’s parliament?

The nation’s biggest disability reform yet, the National Disability Insurance Scheme, is being decided in a place where it is very hard for the voices of people who will actually be affected to be heard.

Indigenous trailblazers, but will there more?

Perhaps most worryingly of all, is that less than 2% of candidates are indigenous.

Liberal MP, Ken Wyatt and Labor MP Linda Burney are the first indigenous man and woman elected to the House of Representatives and they both sit in the current parliament, but despite their dogged determination and advocacy, the lack of more indigenous representation means the traditional owners of this country barely have a whisper in our national Parliament.

Richly multicultural, modern Australia harbors individuals whose origins span the globe. But while our society may be defined and enhanced by our ethnic diversity, our political systems are not.

The Australian Human Rights Commission estimates that Australians with a non-European or indigenous background make up an estimated 24% of the population. Yet candidates with such backgrounds account for only 1 in 10 candidates in the upcoming election.

There are many ways to look at cultural diversity, including percentage of Parliamentarians born overseas or who speak a second language, however we have adopted the definitions used by the Australian Human Rights Commission.

Australia has far less diversity in its legislature than comparative countries such as Canada, the United States and the UK and representation is even less diverse when you look at positions of power within Parliament.

“There isn’t an issue with people getting a start in Australian organisations, but walking into the lobby doesn’t mean you can get the elevator to the top floor.” 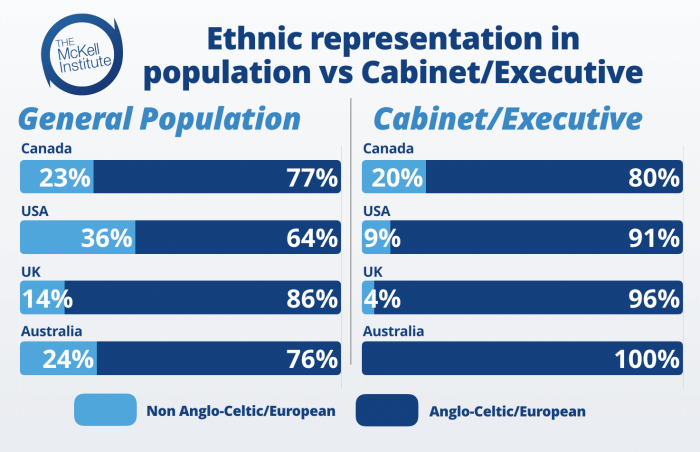 A parliament that is not representative cannot deliver a legislative agenda that delivers for the needs of everyday Australians.

This election, it’s time to have a discussion about ways we can make our Parliament more representative, encourage more women, more people from more diverse cultural and economic backgrounds and those with a range of physical and intellectual abilities to run for office. But the challenge isn’t just about electing more diverse leaders, it’s about making them feel welcome and that their voices can be heard once they enter the doors of Parliament, otherwise, they’ll never stay.

No one rule will change this and it’s not something that can be changed in one term either. It requires incremental changes over time.

In the Old Parliament House, space was reserved to build a Public Bar, in the New Parliament House, space was reserved to build a childcare centre. There are now a lot of mothers who sit in Parliament. Tanya Plibersek, Michelle Rowland, Kate Ellis, Amanda Rishworth and a number of others have all given birth whilst in Parliament. Two years ago, Senator Larissa Waters became the first woman to breastfeed on the floor of our national parliament. A completely normal, everyday action, that unknown to her at the time, affirmed the right of all mothers to be in Parliament.

Tiny changes, to practices and behaviours can have monumental impacts.

Organisations such as the Elizabeth Reid Network, Emily’s List and Women for Election have been established to open the door, mentor and financially support women running for parliament with great success. The establishment of similar grassroots, not-for-profit organisations aimed at attracting candidates from a wider cultural and economic demographic of our society as well as those with a range of physical abilities would be one way in which we could encourage a more diverse range of leaders. Having access to knowledge, connections and advice from leaders of their chosen field can significantly empower aspiring candidates.

Current parliamentarians could develop deliberate strategies and pathways to improve diversity in their top ranks. Top leaders who are cognizant of the need for more diversity can impact the shape of Parliament and help to drive change in organisational attitudes and culture.

What gets measured, gets managed and by shining a light on what our Parliament looks like, we can help look to areas where may need to change.

* Data on candidates running for the 2019 election is based on the House of Representatives seats where the major parties (Liberal, National and Labor) have pre-selected candidates as at 14 April 2019. There are still seats in which a candidate is yet to be pre-selected and this will be updated prior to the election.