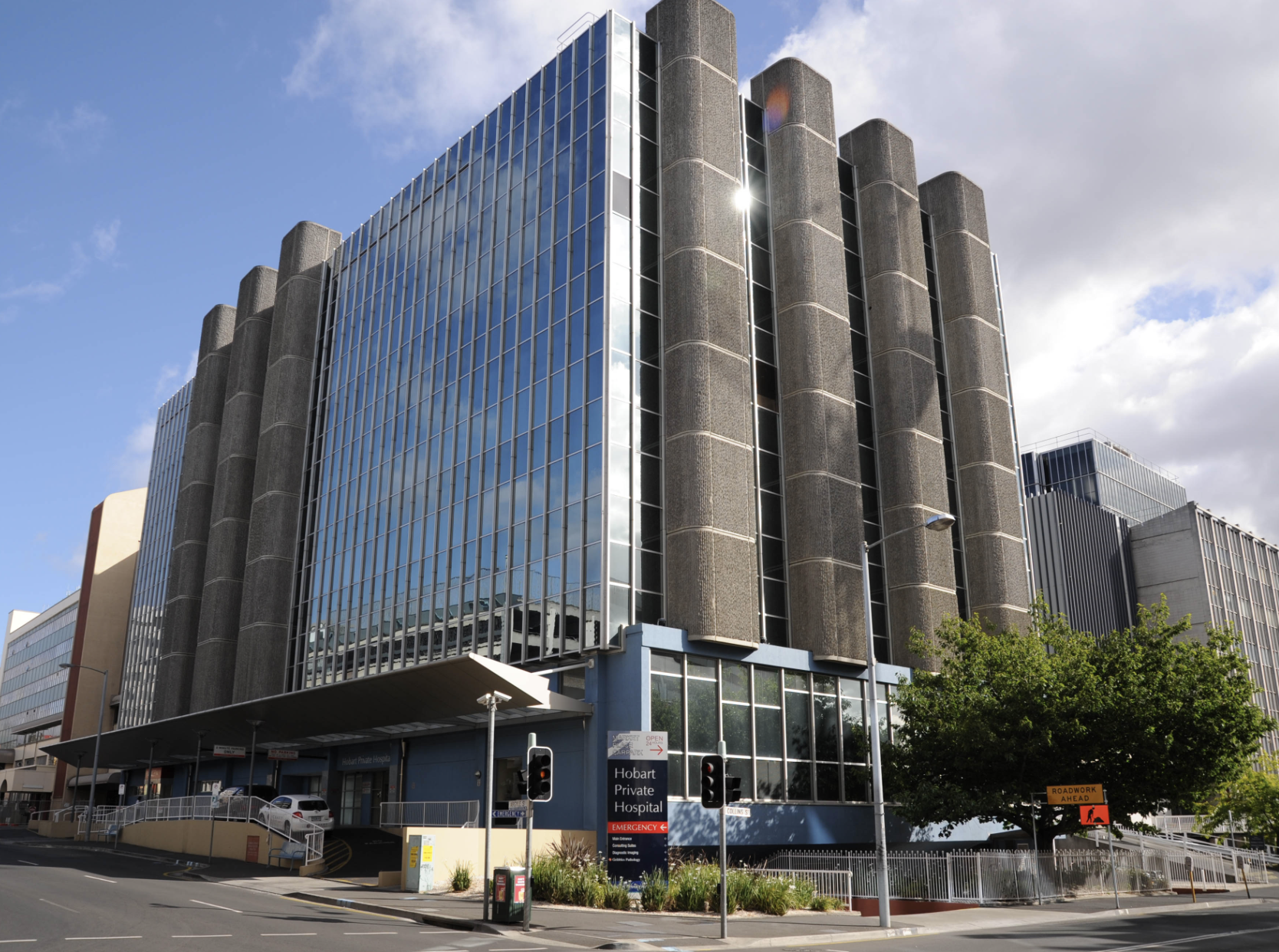 As the New South Wales Government proposes to put more public hospitals into private control, claiming superior performance of the private sector, patients and taxpayers are entitled to ask if these privatised hospitals stack up. However, if we look at performance data today, it is not possible to make any claims they provide more effective or efficient services than publicly run hospitals.

Privately run public hospitals are becoming a more popular choice for governments, but are operating below the radar. They avoid reporting publicly on a range of performance indicators that are required for publicly run facilities. Patients and taxpayers are in the dark as to how public funds are being spent, and whether the care provided is up to standard. If the government proceeds with more privatisations, they must require that these hospitals are subject to the same performance requirements as their public hospital peers.

Private sector involvement in providing public healthcare is not new. In recent decades, public private partnerships (PPP) in health have become more popular with governments of all persuasions. Across the country a number of PPPs have been developed whereby a private provider takes responsibility for building and operating a new public hospital.[1] Some of these PPP arrangements, including the Casey Hospital and Port Macquarie Hospital PPPs, have been  found to have a mixed record in providing value for money and quality for taxpayers.[i]

These arrangements build on discussion over many years of the merits of inviting the private sector to deliver more public services. The current Commonwealth Government has actively advocated for privatisation,[ii] and the Productivity Commission last year recommended more “contestable approaches to commissioning services”.[iii] The Centre for Independent Studies (CIS) has called for greater involvement of the private sector to “encourage productivity and improve access to quality hospitals services at the least cost”.[iv] In 2013 the Queensland Government announced that the new Sunshine Coast University Hospital will be built and operated by a private provider,[v] with the Queensland Health Minister highlighting the benefits from such an approach. Most recently, the NSW Government likewise announced it will establish the new Northern Beaches Hospital under this model, and is currently inviting the private sector to do so at five public facilities in the state.[vi] Premier Baird claimed such a model will provide an opportunity to give patients “the best possible services for NSW we can get,” and that it would “maintain quality healthcare while delivering the best value”.

These statements ignore comprehensive non-partisan evaluations that have failed to show private hospitals outperform public hospitals.[vii] Rather, they appear to be based on a belief or an “ideological commitment”[viii] that the private sector delivers higher quality services more efficiently than the public sector.[ix]

This is a familiar ideological debate between the defenders of public (government) managed services and those favouring a stronger role for the private sector.

Despite the long held debate, little attention has been paid to how these hospitals actually perform under privatised arrangements. With a number of privatisations planned, we need to look closely at whether privately operated public hospitals are delivering better value services for the taxpayer, as claimed.

To do this, an objective analysis was done on performance of the small number of health facilities that are publicly funded and privately delivered (“privatised” for the purpose of this paper) and ask the question: do privatised hospitals outperform their publicly run peers? Is the rhetoric from politicians matched by actual performance?

Note that the relative merits of public and private health service delivery, or the pros and cons of PPPs were not examined in this paper – though those debates and analyses are ongoing.[x]

Public and private hospitals both have an important role in the health of the communities they serve. Australians are deeply invested in ensuring their local hospital is adequately resourced and performing well. Thanks to policy changes to improve transparency in recent years, the community is regularly informed about how their local public hospital is performing against national benchmarks and compared to other hospitals.

This is an enormous investment of Australia’s resources. The 2011 COAG National Health Reform Agreement reflected a growing recognition of the need for transparency, accountability and performance reporting.[xii] The Agreement introduced a Performance and Accountability Framework for nationally consistent information on the performance of all health and hospital services, including private hospitals.[xiii]

Importantly, the Agreement includes a provision to cover ‘private or not for profit provision of public hospital services’ in which hospitals covered by these arrangements are treated as a public hospital for the purpose of the Agreement.[xiv] Under this reporting system, public and private hospitals are now required to publicly report on a range of clinical and financial outcome performance metrics,[xv] through the My Hospitals website run by the Australian Institute of Health and Welfare (AIHW).

In addition, given the large sums of taxpayer funding invested in their operation, public hospitals are also subject to close parliamentary scrutiny. As a result, the public are generally well informed about the quality and financial performance of their local public hospitals. Private hospitals are formally included in the reporting framework and required to provide data to the AIHW for analysis and publishing on My Hospitals.

Drawing on the My Hospitals website and publicly available information from government and private operators’ websites, there are currently five hospitals in Australia that meet these criteria:

All five hospitals are operated by Ramsay Healthcare, a publicly listed multi-national company which operates 70 health facilities around Australia and many others internationally.[xvi]

Although a small number of facilities to examine, some useful comparisons can be made and to demonstrate where comparable performance data aren’t available.

All performance data has been drawn from publicly available sources, in particular the My Hospitals website and the state health department performance websites. To enable a fair evaluation of performance, the five facilities will be compared, where possible, against the performance of their “peer” public hospitals.[2]

The My Hospitals website lists individual hospital performance against a number of metrics. A selection of performance metrics has been selected for this comparison, including access, clinical performance, safety and quality and financial measures:

How do they stack up?

Taking these five measures, we look at how the five privatised hospitals compare to their peers:

*Data is from 2013-14, the latest data available on My Hospitals. Data for the past two financial years for Peel is unavailable on either MyHospitals or the WA Health website.

Overall, performance was mixed, with two of the three reporting hospitals outperforming their peers in a majority of categories. However, Joondalup Hospital had longer wait times than its peer hospitals for all triage and wait categories. It should be noted that Peel’s data is older due to a lack of updated publicly available data. More up to date data was requested from WA Health but not received. Neither of the Queensland hospitals report any emergency department performance data publicly. 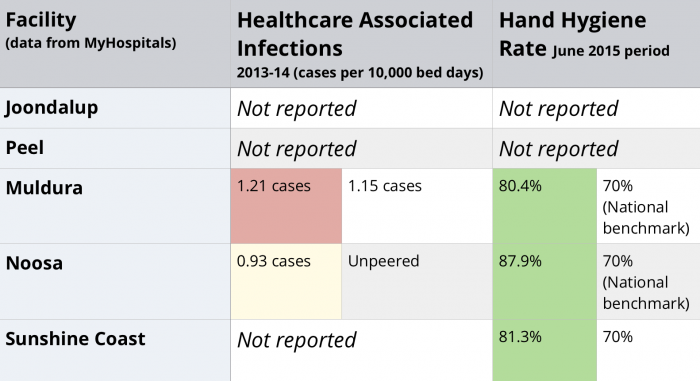 On the two measures for safety and quality, there is a concerning lack of data. Neither of the West Australian hospitals have data on My Hospitals or the WA Health website. Mildura Hospital performed better than the national benchmark for hand hygiene, but below its peers on healthcare associated infections. Hand Hygiene compliance had the only reported data on My Hospitals for the two Queensland Hospitals, with Noosa and Sunshine Coast hospitals both exceeding the national benchmark for hand hygiene rates. Noosa’s healthcare acquired infection rate of 0.93 cases is unpeered, precluding a comparison, whilst Sunshine Coast did not report on this measure.

The only hospital that had financial data on My Hospitals was for Mildura. Mildura had a National Weighted Activity Unit cost significantly lower than its peers in 2013-14, indicating that Mildura is delivering services more efficiently than its peers.

From the latest data available on the WA Health website, Joondalup and Peel are both exceeding their budget. These data do not provide any detail on the amount of the budget overspend, nor allow for a comparison with peer hospitals, so there are clear limitations to this data.

Neither of the two Queensland hospitals report any financial data on the My Hospitals or Queensland Health websites.

Findings – where is the evidence?

A close look at the available performance information on these hospitals highlights two key issues:

The five privatised hospitals have a very mixed record in reporting. Whilst Joondalup, Peel and Mildura have data on most clinical and access indicators, there is almost a complete absence of performance data for the two Queensland hospitals. This is a significant gap in financial performance reporting and on the safety and quality measures, which is a concerning lack of transparency in the expenditure of taxpayer funds and achievement of quality standards.

The privatised hospitals perform better in some measures, and worse in others. Alarmingly, there is insufficient data to make any comparisons on safety and quality, and financial performance. It is simply not possible to make any comment on the Queensland hospitals, given the almost complete lack of performance data reported.

So, when the public rightly asks “do privatised hospitals outperform their public hospital peers?” the answer, in short, is another question: “how can we tell?” There is simply insufficient performance data reported by the privatised hospitals to allow for any considered answer to this question.

It appears that when governments invite the private sector to provide public services, the reporting and accountability arrangements are not clearly defined, or are not requiring the new operators to report on performance- or both. The lack of transparent performance reporting by these hospitals is concerning for a number of reasons:

As Australia’s governments prepare to begin the next round of negotiations for the next hospital funding agreement, this ambiguity should be addressed, so that all taxpayer funding for hospital services is properly accounted for and reported transparently. Publicly reporting on performance is now an expectation of all other hospitals in Australia, and bringing the privatised hospitals into the reporting framework will place the same requirements on them that are placed on their peers.

Recommendation 1: Bring privatised hospitals into the Performance and Accountability Framework

Whilst the National Health Reform Agreement states that privatised hospitals are to be treated as public hospitals, this provision has not carried over to the Performance and Accountability Framework that sits under the Agreement. The next hospital funding agreement signed by COAG needs to explicitly clarify how privatised hospitals are to be treated in terms of reporting and accountability.

We can see that taxpayers are not given the chance to know how privatised hospitals are performing- whether they are receiving value for money and quality care. The meagre amount of data doesn’t allow for any definitive conclusions; this fact alone tells us it is misleading to claim that the private sector delivers a superior or lower cost service. These claims simply are not based in evidence because there isn’t any. The absence of data exposes these claims as ideologically driven political rhetoric. Taxpayers and patients deserve better than that.

[1] For example, the Royal North Shore Hospital redevelopment was a PPP arrangement whereby the private consortium financed the reconstruction costs of the hospital and will operate non clinical services at the hospital on behalf of the government for the life of the contract.

[2] Hospitals on My Hospitals are grouped to allow for fair and meaningful comparisons with similar hospitals and minimise the effect of different hospital size, service provision mix and regional/rural location.

[i] McKell Institute, Risky Business: the pitfalls and missteps of hospital privatisation, November 2014, accessed on 15 December 2016 at https://www.hsu.asn.au/wp-content/uploads/2015/02/McKell_Hospitals_A4_V3.pdf

[viii] Corderoy, A, The Guardian, Our hospitals are being privatized. Is anyone paying attention?, 20 September 2016, accessed on 7 January 2017 at  https://www.theguardian.com/commentisfree/2016/sep/20/our-hospitals-are-being-privatised-is-anybody-paying-attention 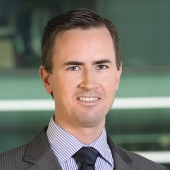