Home Articles How much will JobKeeper reductions affect your community?

How much will JobKeeper reductions affect your community? 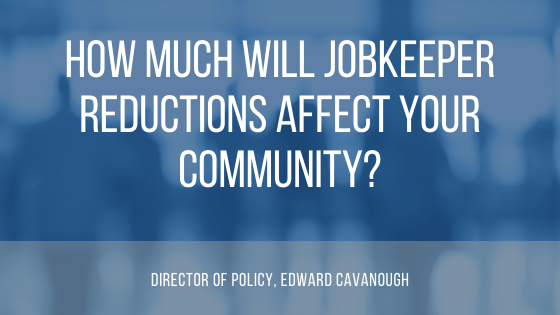 JobKeeper has provided a vital lifeline to Australian businesses and workers during the worst economic downturn since the Great Depression.

The McKell Institute’s latest report, Crossing the Fiscal Cliff, shows the $1.52 billion per fortnight reduction in JobKeeper expenditure after September 28 will withdraw significant fiscal support from local economies across Australia.

The JobKeeper program offers a wage subsidy to eligible businesses. Designed quickly at the start of the pandemic, the program delivers a $1500 flat-rate payment to all eligible employees, irrespective of the amount of hours they work. When announced, the JobKeeper payment was scheduled to conclude by the end of September. However, the significance of the second-wave of COVID-19, predominately in Victoria, demanded that the program be extended.

JobKeeper cannot continue forever. Beyond its expense, it also injects genuine distortions into the labour market, dissuading labour mobility and enabling potentially unviable enterprises to continue. In good economic times, these distortions would ensure the program would never be enacted – but these are not good economic times. Unfortunately, the significance of the COVID-19 recession is such that any premature withdrawal of fiscal support is likely to further delay the road to recovery for the Australian economy.

In Crossing the Fiscal Cliff, we wanted to see what the impacts of the JobKeeper adjustment would be, not just on the national economy – but on state and local economies.

The numbers make it clear that winding back the payments prematurely risks Australia’s economic recovery.

Every industry in every jurisdiction has accessed JobKeeper in significant numbers.

While there were plenty of headlines surrounding the impact of the COVID downturn on some vulnerable industries such as hospitality, tourism or aviation, JobKeeper has been widely adopted. The changes in the program are particularly significant for part time workers fully reliant on JobKeeper, who will lose half their income. Hopefully, some of the businesses will be able to shift that additional labour cost onto their own books – as is the Government’s intention – minimising the individual income loss for some individuals. But this is not guaranteed, and risks raising the unemployment rate as businesses struggle to make up the shortfall.

Nationally, the September 28 wind back of JobKeeper payments is expected to save the Government around $1.52 billion every fortnight. This is likely premature, given the sluggish state of the economy and impacts of Victoria’s second-wave and associated border closures. At the time of writing, 5 million Victorians remain in 23 hour-a-day stage 4 lockdown – hardly the best time to begin winding down fiscal support.

The JobKeeper reduction is premature

Ultimately, the JobKeeper changes represent a significant fiscal contraction at a time of high unemployment and dampened economic activity.  The proposed changes to JobKeeper will, in effect, remove up to $1.52 billion from Australian workers’ back-pockets per fortnight after September 28. That’s $760 million or so every week. It’s a risky strategy in a recession, that will likely drive up unemployment and force more businesses to close – well before any snapback has materialised.

How much will your community be affected?

We’ve crunched the numbers to explore how much JobKeeper support will be withdrawn from every postcode area in Australia after September 28.

Search your postcode below: