This article is a modified version of a speech by Hon Rachel Nolan delivered to the 11th Queensland Transport Infrastructure Conference.

I acknowledge the Turrbal and Yuggera people who have forever been the owners of this land.

This is the 11th Queensland Transport Infrastructure Conference.  I spoke at the first two. At the time we were emerging from an economic crisis and I was talking about the Queensland Government’s plan to privatise a coal railway, QR National; getting out of coal in order to fund a sustainable transport infrastructure program focused on busways and passenger rail.Who can explain the mystery of time?

But here we are emerging from an economic crisis and considering a $200-$300 billion national infrastructure program, most of which is in transport. We know from the recent budget that the federal government’s contribution is overwhelmingly in roads[1].  The notable exception is Inland Rail which in December experienced a $5.5 billion budget blowout.[2] The state spend is split across roads and public transport, primarily through Cross River Rail.  Today, the sustainability discussion focuses on electric vehicles, to which I’ll return.

When I last spoke at this conference, carbon levels in the atmosphere were 390 parts per million (ppm).  Today they are 416ppm.[3]  The average temperature in Australia rose by 1 degree in the last century.[4]  We Queenslanders are making an oversize contribution.  While climate policy tends to be a national matter, the fact is that we live in the highest carbon emitting state of one of the highest carbon polluting countries in the world.

Carbon Emissions per capita : Queensland and the world

Europe and China emit 7mt CO2 e per capita, the US and Australia overall emit 16t CO2 e and in Queensland, with our combination of coal power, a dispersed population and fugitive emissions from coal and gas, it’s 31mt.  The worst country in the world on World Bank figures is Qatar at 39. Transport is the second largest contributor to Queensland’s emissions behind stationary energy.

Queensland used to have very high emissions from land use but highly contested state land clearing legislation from the 1990s onwards caused land use emissions to plummet.  In fact, those laws were the reason Australia met its Kyoto emissions reduction targets – for which our country was until recently trying to claim carryover credits[5]. I say that because it’s interesting and because it demonstrates the power of deliberate policy.

Today, as Australia embarks on a massive road infrastructure program, the primary policy idea put forward to reduce transport emissions is the large scale take up of electric vehicles. While that sounds good, the problem is that Australia, and Queensland in particular, gets its electricity from fossil fuels.  Over the last 12 months, 74% of Queensland’s power came from black coal and 9% came from gas.

To be fair, there is growth in solar and while electric vehicles remain small scale, companies like Chargefox, who’ve spoken earlier today can acquire that solar for their charging stations.  But that won’t be true at scale. As this National Energy Market data for the planned life of Queensland’s coal and gas power stations shows, the current projection is that we’ll be using fossil fuels into the 2030s, 40s and 50s.

We have a National Energy Market.  Without a comprehensive national energy policy, electric and even hydrogen vehicle strategies are really plans for coal fired cars.

So what can we do? From a policy perspective there are three things –

Last year at the peak of the COVID lockdown, the McKell Institute undertook a major research project Riding the Revolution, A New Approach to Active Transport in South East Queensland.  The report looked at active transport, asking whether it’s a real option and what exactly we would have to do to get it happening here?

Riding the Revolution began with an international policy scan.  We looked at the cities of the world in which active transport – cycling and walking – make up a significant mode share.

At the time, e-scooters weren’t in it because the trend is so new there’s no data but e-scooter usage is exploding and they should be considered active transport too.

The three primary cities we considered were –

The primary lesson from these cities, which are all very different, was that they had no natural advantage when it came to active transport.  In every case, a public groundswell led to a deliberate policy response.In Copenhagen, cyclists started to protest being pushed off the road by cars in the 1970s, a move that led to designated cycling funds in every national budget from 1982 to 2001.

In Bogota, a student called Ortiz Marino returned from the US in the late 1960s and, having seen the flight to the suburbs that was destroying inner cities there, convinced local authorities to start little cycling festivals Ciclovia, which originally closed streets around two inner city blocks to cars on Sundays.

Marino had radical ideas – he saw bikes as drivers of equity, urban renewal and joy.  Ciclovia now closes 120km of Bogota streets on Sundays and it’s spilled over into a community appreciation of cycling as a form of transport.  Bogota has a comprehensive network of dedicated cycle routes and high cycling mode share.

In South East Queensland, we often hear that active transport couldn’t work because of natural impediments – it’s too hot, too hilly, there’s too much sprawl and the infrastructure’s too expensive.  But Portland has sprawl, Bogota has GDP per capita of less than $7,000 (compared to $57,000 for Australia)[6] and in Copenhagen people get up and ride their bikes after it’s snowed.

So how does our region compare in terms of policy? At present, the official State Government figure is that 10% of trips are taken by active transport.  That includes walking but it’s still probably a high estimate. With the exception of the ACT which is a different beast, Queensland surpasses the national average for the proportion of road funding that goes to cycling – at 1.5%.

There are no targets for shifting mode share to active transport and no designated line items in the budget.  The current State Government does have an excellent policy to build bike lanes into any major new road or rail infrastructure project but other funding is ad hoc which leads to cycle networks that are full of gaps.

When surveyed, many people express an interest in bike commuting but most of them say they wouldn’t do it because the roads are unsafe.

The average South East Queensland commute is 17.4km and a base model $2-3,000 e-bike has a range of 50km.  That means e-bikes are a real commuter option if the perception of safety issues can be addressed

So, what would a serious active transport policy for South East Queensland look like? Well, the first thing we would have to do is decide we want to.  And if the emissions data wasn’t cause enough, perhaps we could take this as a motivator – Queensland Health data shows us that two thirds of adults and 24% of Queensland children are overweight.

The McKell Institute has developed a suite of recommendations including –

These changes are affordable with a different set of priorities.  As I mentioned earlier, the federal government added a $5.5 billion funding increment to Inland Rail in December.  You’d get a lot of small works packages for that.

Of course, active transport is not a complete transport solution – it doesn’t address freight and it won’t help with some of the very long commutes that people on the Gold Coast, Sunshine Coast and Ipswich, where I live, undertake.

Particularly with the advent of e-bikes and scooters, however, it is now a real option for journey to school and for adults on small and medium trips.  Indeed, as the COVID experience shows, the revolution has been happening right before our very eyes.

Riding the Revolution is The McKell Institute’s blueprint for how it can be done. 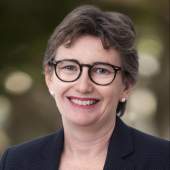