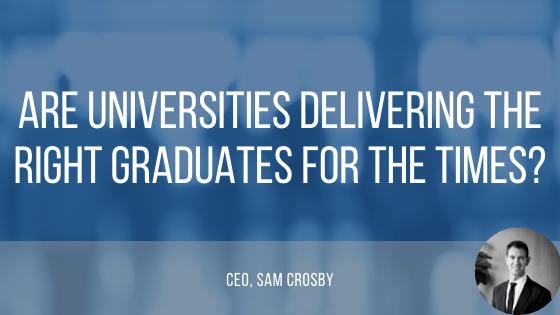 Instead of obsessing over minute gradations in ATAR scores, cap them at 95 and make unis select students on their human skills as well writes McKell Institute CEO for the Financial Review.

Emergencies tend to speed up history, as days of reckoning long prophesied suddenly appear on the horizon. The Australian university sector is currently experiencing such a moment. The full relevance of the shift is not yet clear to all; perhaps least to those with deep connections to the sector. The natural reflex for those directly affected by a shock is to simply right the ship.

That’s fair enough. Hundreds of thousands of livelihoods rely on unis and the immediate situation demands first aid. But if we don’t also use it to re-evaluate the core role of universities in our modern economy, we’ll have wasted a perfectly good crisis.

Ever since the first recognisable universities started developing in the late 15th century, their purpose was clear: a place to keep the brains and the books. It made abundant sense to gather the sources of wisdom so young people of potential had somewhere to absorb it.

In 2020 Australia, that traditional function has waned. Anyone with an internet connection can access lectures, texts, and even interaction from great thinkers in any given field.What universities offer today is reputation. A degree from a university is a recognised seal of approval. It means employers can trust the holder is ready to be a valuable professional.

But is that still the case? Are Australian universities reliably serving up graduates capable of adding value for employers?

The most generous answer is: there’s room for improvement. A senior partner at Clayton Utz explained to me how the firm has now resolved that university results are not a reliable means of identifying good new talent. The firm needs lawyers who can act as trusted advisers,with the emotional intelligence necessary to understand the needs of clients and applying creativity to identify holistic solutions.

With the flow of foreign student money now slowed to a trickle, the time is right to look at the employability question afresh.

Their situation is far from unique. In nearly every sector, jobs that once required the basic application of technical knowledge are rapidly gobbled up by automation. The high-value jobs left require human qualities that cannot be replicated by machines.

In Clayton Utz’s case the firm has now introduced a range of innovative selection measures to increase diversity and do a better job of selecting the best candidates. But surely responsibility lies with universities to assure employers the graduates they offer are suitable people.

It would be unfair to suggest universities are not trying. But the imperative to apply more rigorous and thoughtful hurdles to undergraduates to ensure their employability has been countered in recent times by a converse incentive: the lure of foreign student money. Full-fee paying students from overseas tempt universities to calibrate courses that offer smooth passage to those with the means to pay.

But with the flow of foreign student money now slowed to a trickle – and no guarantee of a return – the time is right to look at the employability question afresh.

And if we’re open to bold ideas, there’s no better place to start than with the means through which students get into university courses in the first place: the Australian Tertiary Admissions Rank.

An ATAR is a number between 0 and 99.95 indicating a school student’s relative position. As anyone with a bright teenager in their orbit could tell you, the pressure at the higher end of the ATAR scale is intense. Tiny fractions of percentage points in the high 90s are obsessed over.

But it’s ludicrous to treat ATAR as a precision instrument capable of drawing sharp lines between those who would make great doctors, lawyers or architects, and those who wouldn’t.

Increasingly this is acknowledged by universities. The law school at the University of NSW, for example, requires completion of a law admission test to help identify candidates with the appropriate attributes. But these are small steps. A more radically beneficial approach would be abolishing all ATAR scores above 95.

This would not demand any change to the way we administer high school education. It would just mean schools would obscure any result above 95 from students and universities, and students achieving a 95 or above mark would instead be given a catch-all “top band” ranking.

By throwing a blanket over the above-95 group, the school system would be saying: You are smart enough to do whatever you want at uni. Kids would now be free to explore educational pathways based on interest, instead of hundredths of a per cent.

Universities deciding what school graduates to accept would suddenly be forced to apply much greater sophistication. No longer could they fall back on the fiction there’s a meaningful distinction between a 96 and a 99 student. This would likely lead to a diversity of methods. Some universities might develop proprietary tests. Some might decide to put a high emphasis on extracurricular activity. Graduates from different unis would develop different reputations among employers.

Capping ATARs at 95 would also be of huge benefit to students. Instead of cramming with a tutor to game the HSC, talented students would instead be compelled to consider what activities might make them more rounded, appealing characters.

With anxiety and depression now affecting about 40 per cent of Year 12 students, and suicide rates among young Australians at their highest level in a decade, anything that might relieve pressure and promote a more nourishing sense of purpose would surely be welcome.